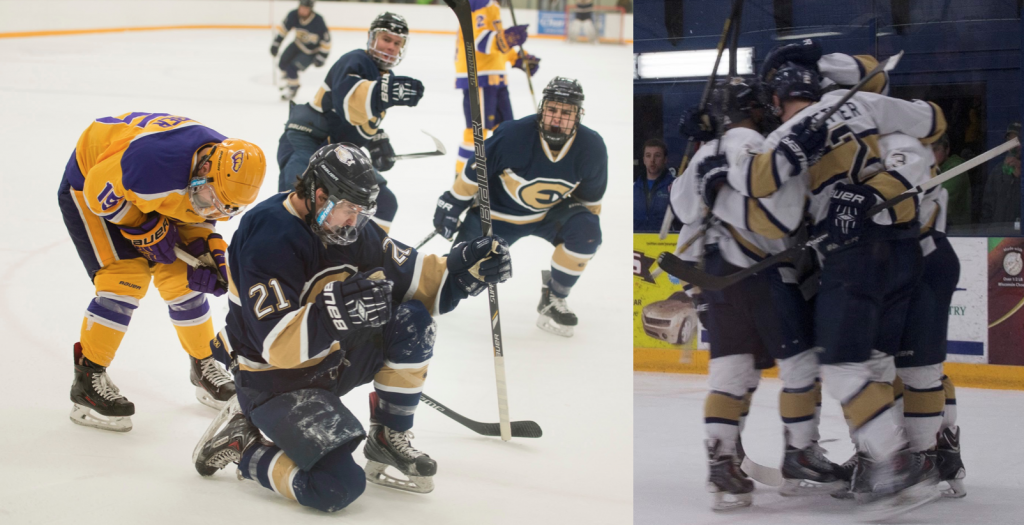 I recently had the rare opportunity for a backstage pass with the University of Wisconsin- Eau Claire hockey team. One of the top Division III college teams in the country, winning a National Championship in 2013. We took a business approach to profiling each player of the team to see what we could learn about their strengths and give the coaches an edge in future recruiting efforts.

Head coach Matt Loen, assistant coach Bob Thorp and I were working together on a way profile the players to help them “Play to their Strengths” and become better players as well as teammates along the way. NHL Scout John Hill, collaborated on the project and leveraged his years of experience playing, coaching and scouting to deliver some great insights.

As for the players, they started to understand how learning their tendencies now will help them be more effective in their working lives after hockey has run its course.

What did we learn? –

Flow – 65% of hockey is played “in transition” (meaning switching on the fly from offense to defense). “It makes sense to look for players that can handle that fast-pace transition. Sports like football and baseball can script out how they plan to handle their first series of plays or pitches. With hockey, once you drop the puck, all bets are off. You have 12 players in constant motion. It’s a game of read and react.” – NHL Scout John Hill

System – This team works best when they have one system and make minor adjustments. The players personal profiles showed that they worked best with a single system and stayed with it. Other teams may be built from players that like to experiment or invent on the fly. Different players; different methods. “For this team, they tend to like to stay within a single system. By keeping it consistent, we have allowed them to gain confidence in each other and their game.” – Head Coach Matt Loen

Learning – This team tended to be in the high end of visual learners preferring a demonstration to verbal coaching. “One thing that will help is direct eye contact with certain players as well as verbal reinforcement by speaking directly to them and let them know ‘here’s why we are doing this.’” – John Hill “What struck me the most was the learning styles. Which players need it written vs. told vs. shown by example. It will change the way I approach them in teaching situations.” – Asst. Coach Bob Thorp.

Bridge – We found that in some instances there was a large gap in core tendency communication scores between players and coaches. Coach Loen runs at a fast pace and delivers high-level instructions. That could lead to miscommunication and confusion. That meant that it was helpful to have an assistant reinforce some communication and direction with a different style. The team keeps it’s pace and everybody is on track.

Leadership – They have strong captains on this team in Jake Hopfner, Patrick Moore, Garret Clemment and Adam Knochenmus. Their character on and off the ice makes the coaches job much easier. From ensuring players arrive on time, to off-ice conditioning, to handling personality issues, they keep the team focused.

Unity – Coach Loen places team unity above wins or titles. That’s why he was able to make the hard decision to let 2 players go in previous years that were top contributors, but detrimental to the team. One was one of the team’s top scorers, but his attitude overshadowed the importance of the team. Another was a former Division 1 player with a ton of talent. “Once we let each player go, we could hear a collective sigh of relief from the team.” – Head Coach Matt Loen. It helped everyone else move forward and they came together to fill the voids. (This is no different than a company diva sales person that brings in a lot of business or has some big name accounts, but holds the company hostage in the process. The best thing you can do is cut them loose and carry on as a team if you want to move forward.)

[bctt tweet=”They started to understand how learning their tendencies now will help them be more effective in their working lives after hockey has run its course.” username=”dynasty_leader”]

A majority of the players fell in a mid-level fact finding group. That defines the amount of information they needed before they could take action. Low fact finders would tend to wander off and do their own thing, while a high-end fact finder could become paralyzed by indecision. They also worked better with a small number of well-defined systems that the team could perfect over the course of the season as opposed to trying to develop a match-up strategy against individual opponents. Finally, as with virtually all champions, the individual talent is less important the the united drive to be a great team. When unselfish acts dominate performance, you have a winner.

What they may change:

89% of the team fell in a narrow band (1-2 points of each other). It’s helpful for team unity, but they are also looking for more complimentary skills like a “pure scorer” that will take some chances and experiment more with their game.

Special thanks to Head Coach Matt Loen, Assistant Coach Bob Thorp and John Hill (Pro Scout for the Columbus Bluejackets). Their insights and support for this project were invaluable.